Searching for Healing (and Leopards)
On Safari in Botswana

One meaningful reunion with nature.

If you ever happen to find yourself on safari in Botswana, in a landscape so beautiful it seems like a dream, you’ll quickly learn that afternoons are for relaxing. But if it’s been a long time – say a year or two of lockdown – since you’ve set foot in a faraway place, let alone a trip-of-a-lifetime destination, relaxing can be a challenge. You might, for instance, find yourself transfixed by a tiny frog scaling your luxurious safari tent’s outdoor shower. Ah, nature! you’ll think, admiring the frog’s translucent limbs while water slides down your back.

I didn’t have long to contemplate my new amphibian friend, however, because as I stepped from the shower to my balau wood deck with its daybed and plunge pool perched over a lagoon, I heard a rustle. And there just below, like he was trying to hide without knocking over the timber-slat shower, stood a huge bull elephant flapping his enormous ears and devouring a small tree – leaves, branches, and all.

Jesus, I wondered, dripping wet, could anything be more awesome than this?

Why, yes. Somehow each day on safari in Botswana unfolds a surprise. But just then, I was in the moment, the elephant’s wrinkled skin and expressive ears mapping a country unto itself, his white tusks glinting in the sun. And I was humbled and awed after months of planetwide disruption: two creatures, eye to eye, the elephant just doing what elephants do, looming as large as a baobab.

Botswana is home to the largest population of elephants left on earth, and one of the highest concentrations of these majestic creatures can be found in northern Botswana’s Linyanti Wildlife Reserve. My husband and I had come to see elephants (and lions and leopards and hopefully even wild dogs), as well as to finish a safari interrupted by the pandemic in 2020. Fortuitously, our return coincided with the reopening of Wilderness Safaris’ newly rebuilt DumaTau Camp, set on the Linyanti between two ancient “elephant highways” at the end of the Great Rift Valley. Since 1997, DumaTau has had a mission to protect these migration routes so wildlife – especially endangered elephants and wild dogs – can move freely.

I’d been hearing about Botswana from travel insiders for years: how the country, thanks to its stable government and progressive social policies, is one of Africa’s biggest success stories. And how its low-volume, low-impact approach to tourism sets it apart as more conservation-minded than some of its neighbors. I’d also heard Botswana has some of the most exclusive camps in southern Africa, camps with an incredible sense of remoteness (and a lack of fences), meaning up-close encounters with wildlife. Even in peak season, word was that you’d often be riding in the only safari vehicle in sight.

“When I’m designing a safari in southern Africa, Botswana is a must,” says Virtuoso travel agency executive Fernanda Martín del Campo. “It’s the true wildlife experience, as the areas along the Okavango Delta are so large and animals roam freely. So exploring this region is wild, exclusive, and more private than any other safari adventure in Africa. And in Botswana you can experience both savanna and water.”

After two nights in the Linyanti, my husband and I planned to spend three more in the nearby Okavango Delta. With two camps as our bases – and lots of savanna and water – we set out on a six-day trip. 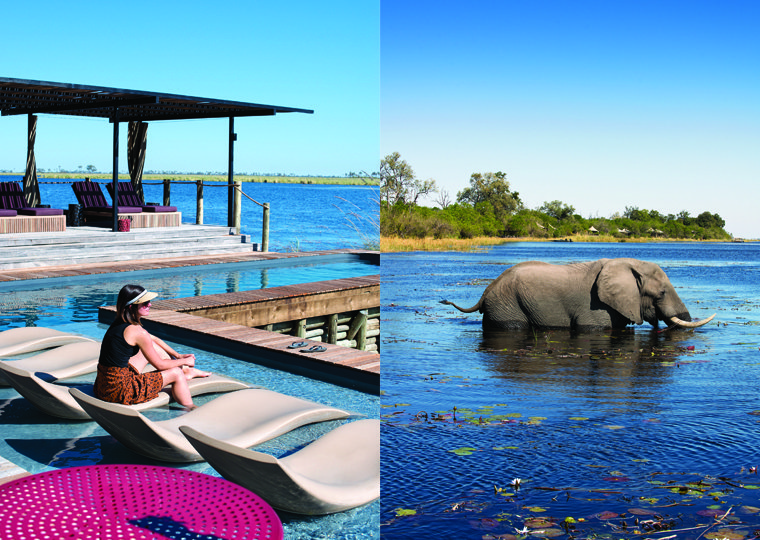 DumaTau, which means “roar of the lion,” stands out for its safari-chic design, light footprint (it’s 100 percent solar powered), and gorgeous setting on the edge of the Linyanti’s Osprey Lagoon. Each of its eight tented suites has airy, uninterrupted views of sweeping plains where mega-herds of elephants enter and exit as if from a vast stage. Light dances over the water, and the grass glows emerald green.

To get there, we’d boarded a Cessna Grand Caravan with eight other passengers in Maun, Botswana, then flown over the floodplains of the Okavango, the world’s largest inland delta. As we made stops at dirt airstrips, dropping off guests at camps along the way, the landscape glimmered with ponds and streams, and the green scrub turned greener.

DumaTau’s airstrip was awaiting repairs after the rainy season, so we landed two hours away, a tiring turn of events after having flown halfway around the world. But then we met Rogers Kesietswe, our guide, who was waiting beside the airstrip with a rugged Toyota Land Cruiser. The four of us remaining passengers climbed in; Rogers offered us cold beers, wine, even gin and tonics, and turned the trek into an unexpected evening game drive. As we bounced along in the open air, it soon became apparent that it was a privilege to spend even two minutes with Rogers, let alone two hours.

We all ducked in unison as rogue branches tried to scalp us from both sides of the track.

“We have much work to do with the machetes,” Rogers said, glancing back.

In the year since the pandemic shut down the world, the bush has begun reclaiming itself – a wondrous thing to see. The roads were smothered with grasses. The scrub had filled in, covering some of the dirt tracks so thoroughly that if you didn’t know where they were, you’d never find them. Bouncing through the dusk as the air cooled, taking tentative sips of beer while trying not to knock my teeth out, I realized happily that nature hadn’t missed us. Not one bit.

“Look, a hamerkop with a tadpole,” said Rogers, pointing. We swerved around a long-legged brown bird high-stepping through a puddle.

“A what?” I yelled over the roar of the engine, scribbling Hammer Cop in my notebook. Rogers explained that the hamerkop is a medium-size wading bird, and that the shape of its head resembles a hammer. Coolest of all, it constitutes a family and genus all its own.

There was a softness to the evening, and as the night grew darker, the scents of the bush grew stronger.

“Ah, wild basil,” Rogers said, and we all breathed in the delicious minty dusk. 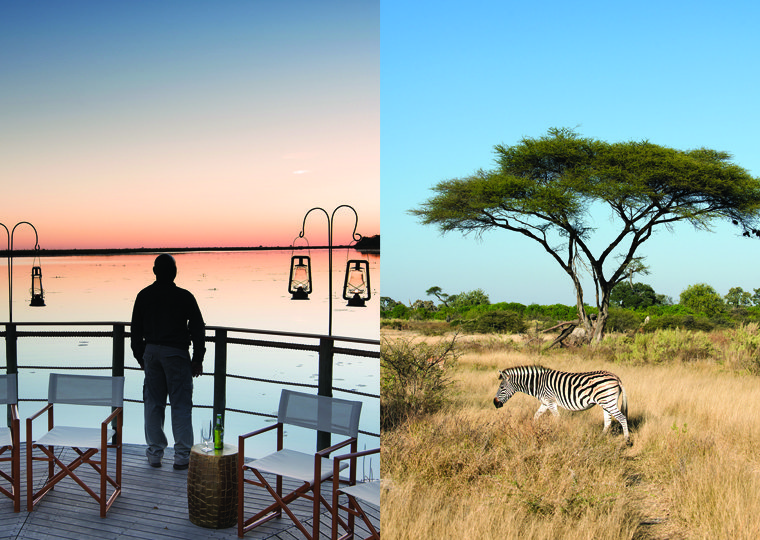 Wilderness Safaris operates camps and safaris across seven African countries, but began in Botswana 38 years ago when friends and bush guides Colin Bell and Chris McIntyre fell in love with Africa’s remote, wild places. Their vision was to protect those places by enabling people to visit them, and at the same time, earn a living for themselves as well as families living in nearby communities.

Today, the outfit is known for its pioneering conservation initiatives: among them, reintroducing black and white rhinos to the Okavango in partnership with Botswana’s government after the species was declared extinct in the wild in the country. Since tourism revenue directly supports each camp’s conservation projects and serves as a deterrent to poachers, travelers contribute directly to these efforts. This past year, when many among the staff had to be sent home, sustainable tourism’s role in supporting local communities and conservation efforts became painfully clear.

All of this made being among the first guests to experience the just-reopened DumaTau a profound delight. Pulling up that evening with Rogers, we were welcomed into a terrific open-air canvas-and-timber bar, living room, and library before being guided down elevated wooden walkways to our tented suites. Ours had a private plunge pool, a bed draped with terra-cotta-hued linens and white netting, and a separate living room filled with thoughtful touches such as a coffee station on the back wall alongside an artistic “curiosity box” containing photographs and sketches of the endangered local elephant and wild dog populations. The canvas walls opened to waterfront views. 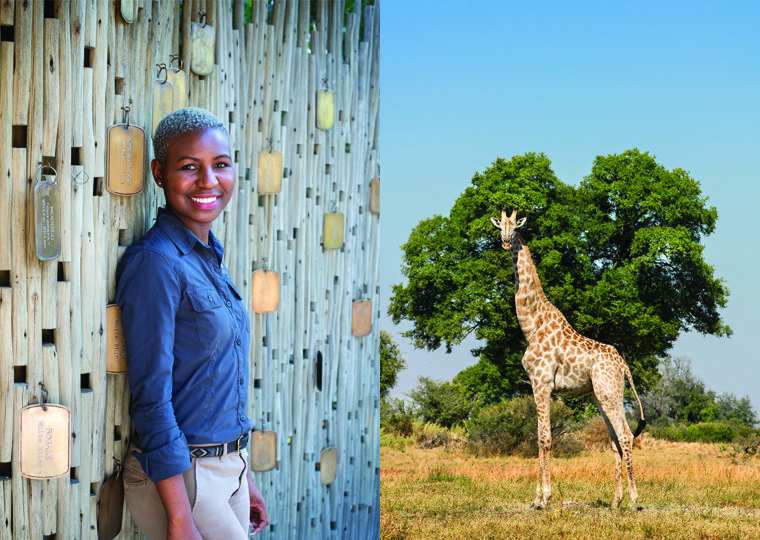 Mornings quickly became my favorite time at camp. As the sun rose over the dim lagoon, we’d join a handful of other guests for a fireside breakfast – fresh fruit and yogurt, pleasantly smoky grilled flatbreads, and rich, dark coffee – around the lovely boma, a sand-filled fire pit on a platform floating over the water. By 6:30 we were in the Land Cruiser with Rogers at the wheel, plus blankets, binoculars, and more coffee, about to enter a place vibrating with birds and animals.

There was so much to see, I couldn’t keep up: Cooing, chirping, warbling… coo, coo, coo. Crocodiles! my scribbled notes read.

There’s nothing like coming from a noisy world to a quiet one, I thought. A world where you’re reminded of the natural order of things.

After two days at DumaTau, a short flight over the Okavango’s wandering river and green islands delivered us to Mombo, set on Chief’s Island, smack in the middle of the wildlife-rich Moremi Game Reserve. Eight “tents” on raised platforms, outfitted with canopied beds and copper tubs, overlooked the game-filled floodplain. When it opened as Wilderness Safaris’ first luxury camp in the 1990s, Mombo set a new bar in the design of sustainable safari camps. Since then it’s been reimagined four times and is still considered one of Africa’s most classic tented safari experiences.

Our animal encounters at Mombo were the highlight of the trip. It didn’t hurt that we were riding with Sebonta “Zee” Thekiso, a veteran guide of 21 years whose name means “the boss.”

“My father worked in mining and wanted me to have a powerful name,” he explained the first morning as we drove through thick vegetation: shrubs, tall grasses, palms, baobabs, giant vachellia trees (formerly known as acacia). We spent time watching a pride of 11 lions finish off an elephant carcass while dozens of vultures perched overhead in the branches. By 8:45 a.m., Zee had found a female leopard at the base of a tree guarding a kill.

“Ah, the leopard. The loner. It is very good to be a loner,” Zee said philosophically. I wanted to ask why, but never did because – wow! – all of a sudden he spotted two baby leopard cubs hidden deep in the scrub. They were so small. Maybe two and a half months, Zee thought, with tiny ears and quizzical eyes. “Look! They still have their curiosity,” he said, as excited as I was.

We held our breath while the mother leopard leaped up, dragged what was left of an impala she’d stashed in a tree to a higher branch – how exhausting! – then, tragically, dropped it to the ground. She dragged it into the bush and went back to nursing one baby while the other hid. She looked utterly content, albeit tired, licking her tiny spotted cub all over, then dozing while it nursed.

Zee, my husband, and I sat quietly and watched the leopards for an hour. There was only one other family at the lodge this early in the reopening. Their vehicle came and went. But I could have stayed with that mother leopard all day, it felt so healing after everything the world had been through. So we sat and watched nature confidently doing what it does. The leopard caring for her tiny cubs; the elephants in the distance, so huge, with room to roam; and all around us a hum, the sounds of herbivores grazing and doves cooing and swirls of snow-white egrets lifting like clouds into the sky.

To learn more and schedule your vacation with Le Grande Butler, contact us today!